Travelling with your vape Thirty years ago, passengers and crew were allowed to light up during airline flights, and non-smokers were forced to put up with it. That all changed when pressure from a flight attendants’ union convinced U.S. authorities to change the rules in the late 1980’s. By 1990, cigarettes had been prohibited on most domestic flights, and within a few years smoking was completely banished from virtually all airlines around the world.

By the time e-cigarettes became popular, indoor smoking bans had eliminated cigarettes from most airports too (except for some with smoking lounges), and people were accustomed to not smelling or seeing smoke — or anything that looked like smoke — during air travel. But smokers still exist, and nowadays so do vapers. We travel too, and airlines and airport security staff know that we need to be accommodated.

Can you take a vape on a plane?

If you’re a regular nicotine vaper, air travel is pretty straightforward. The process of flying with vaping gear is relatively simple, and you won’t have any problems as long as you follow some basic rules and know the procedures.

Before you fly: planning and packing

Although we’re referring specifically to Transportation Security Administration (TSA) regulations for traveling with vapes, the rules of air travel are mostly the same around the world. Because of terrorism-era security threats, the processes and requirements have become standardized. Our advice for vapers will apply almost everywhere you go, but there can be rare exceptions. Be sure to check with the airline you’ve chosen before you fly, and investigate the laws and rules regarding vaping in the places you’re visiting. Some countries have banned vaping – in which case flying with your vape pen might be the least of your worries!

Because of concerns over explosions and fires caused by lithium batteries in the cargo hold, electronic devices have to be carried on the plane with you. You can’t pack them in checked baggage. The same goes for vape batteries. This is mandated worldwide by the International Civil Aviation Organization (ICAO). If you forget and your luggage is x-rayed, you’re liable to lose that mod and extra batteries, and find your nice new suitcase roughed up. Or they might just pull your suitcase off the plane and leave it at the departure airport. So take vape devices in your cabin luggage (or in a pocket).

Can you bring vape juice on a plane?

You can pack e-liquid in checked baggage if you like. If you pack bottles in a bag that also contains clothes, you should double bag the e-juice using Ziploc-type bags. Imagine arriving for a week of business meetings to find your suits soaked with 200 mL of smelly e-juice. However, an advantage of keeping e-liquid in checked bags is that there’s no size limit for the bottles.

Some vapers use e-liquid with a higher-than-normal nicotine strength when they travel, so they can take fewer bottles and refill less often. If you’re traveling to the UK, EU or Israel, be aware that the e-juice nicotine limit is 20 mg/mL. If you vape something stronger than 18 mg/mL, take it with you, because you won’t find any there!

Most vapers take e-liquid aboard in their carry-on bags, packed with other liquids. If you do that, all liquids (and gels and pastes, like toothpaste) must be packed in a single 1-quart clear plastic bag, which you will have to remove from your luggage when passing through security. No liquid container carried onto the plane can be larger than 100 mL (3.4 oz). It’s best not to take full, sealed bottles, because the pressure in the cabin will expand the liquid, and if there’s no space in the bottle it may leak, or even force the plastic seams of the bottle to split.

That same cabin pressure can cause tanks to leak too. If you’re able to completely close the airflow, do that, but many modern tanks never fully close. Your best bet to avoid leaky tanks is to leave them empty till you arrive at your destination, and use something simple in the meantime, like a pod vape.

Avoid traveling with devices to these destinations


Argentina: Vaping has been banned in Argentina since 2011. You cannot legally purchase, sell or import e-cigarettes and even nicotine-free e-cigarettes are banned.

Brazil: The Brazilian government banned the manufacture and sale of e-cigarettes in 2014. Fines have been known to be handed out for any product confiscated.

Brunei: E-cigarettes have been illegal in Brunei in 2010. Anyone caught using a vaping device in a no-smoking area can be fined $300 (€256) if it is their first offence or $500 (€427) for a subsequent offence. Personal use is not specifically outlawed but travellers are advised to exercise caution.

Cambodia: E-cigarettes have been banned since 2014.

Egypt: While there are lots of grey areas surrounding the law, e-cigarettes have been banned since 2015 and they can be confiscated at customs.

India: E-cigarettes are banned in six states, including Jammu, Kashmir, Karnataka, Punjab, Maharashtra, and Kerala. The laws are strictly enforced in these states. In 2016, a man was sentenced to three years in prison and fined for allegedly selling and using vapes in Punjab.

Indonesia: Although travellers have reported that e-cigarettes are openly available for purchase in tourist areas and a number of e-cigarette cafes openly operate in Bali, vaping is banned in Indonesia.

Jordan: E-cigarettes, including those without nicotine, have been banned since 2009.

Lebanon: E-cigarettes have been banned since 2016.

Oman: While some expats report that personal use is still permitted, e-cigarettes have been banned since 2012.

Qatar: E-cigarettes have been banned since 2014 and cannot be brought into the country.

Malaysia: The laws around vaping in Malaysia can be confusing for travellers. While there is no nationwide ban on vaping, the states of Johor, Kedah, Kelantan, Negeri, Terengganu and Sembilan have banned their sale. Vaping is illegal in parks, gas stations and public buildings in Selangor and could result in a $2,300 (€1964) fine or up to two years in prison.

Mexico: E-cigarettes are banned as anything that resembles a tobacco product but is not a tobacco product cannot be sold or imported in Mexico. Although many tourists have been known to enter the country without any complications, there have been reports of authorities confiscating e-cigarettes for various reasons.

Norway: All products containing nicotine are banned in Norway. However, Norwegians can import e-cigarettes if they have a medical note to prove that they need them to quit smoking. Travellers cannot bring e-cigarettes into the country.

Philippines: E-cigarettes are banned and anyone caught breaking the law can face up to four months in prison.

Singapore: All vaping devices, supplies and accessories have been illegal to buy, sell or use since 2010. Fines of up to $5000 (€4270) can be applied for the first offence. E-cigarettes can be confiscated at customs and are considered contraband.

Taiwan: E-cigarettes are classified as a regulated drug and their import and sale can lead to prison sentences and fines.

Thailand: Thailand has some of the harshest vaping laws in the world. If you’re caught with an e-cigarette you could be fined and potentially face a prison sentence of up to ten years.

Turkey: E-cigarettes are banned in Turkey and there have been reports of e-cigarettes and accessories confiscated from travellers at customs.

United Arab Emirates: The sale and import of e-cigarettes is illegal. The product will be confiscated at the airport if travellers attempt to bring it into the country.

Uruguay: The sale of e-cigarettes has been illegal since 2009.

Venezuela: While travellers have reported being able to vape in some public places, the purchase and sale of e-cigarettes is banned in Venezuela. Be aware that fines can be given on the spot.

Vietnam: Vaping has been recently banned in Vietnam and harsh punishments can be enforced.

It’s worth noting that many other countries have imposed various restrictions around vaping without enforcing an outright ban. Always check the rules before travelling to avoid any hassle. 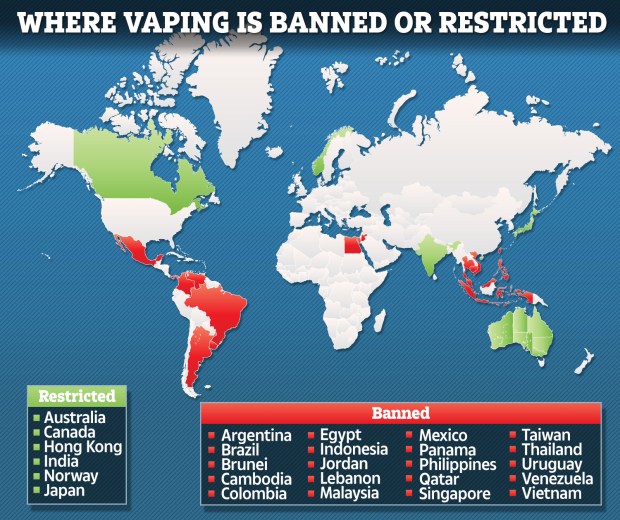 Passing through security: can you bring a vape on a plane?

Lots of people take e-cigs on airplanes these days, so airport security staff are pretty much used to them by now. There’s no need to be nervous about passing the TSA checkpoint! Remember that all electronic devices and lithium batteries must be carried onto the plane, and must go (along with the traveler) through security screening.

For the TSA, vape pens and mods are viewed as just another potential security threat. To prove that your gigantic 200-watt touchscreen vape mod isn’t an explosive, they may ask you to turn it on, so make sure any device you carry onto the plane is charged. That probably won’t happen with smaller devices like vape pens or pod vapes, but since you’re not allowed to charge devices on the plane anyway, it’s best to prepare by charging everything before you leave.

By the way, once you pass through security, you may want to remove batteries from mods to prevent accidental firing on the plane. If you remove the batteries, or if you carry extra batteries in your bag, please keep them in a plastic battery case to prevent them from making contact with each other or metal objects in your luggage.

Finally, if you insist on carrying a coil-building kit wherever you go, be prepared to explain why you’re traveling with spools of wire, screwdrivers, and wire cutters — which looks suspicious. It might be better to bring some pre-wrapped coils if you’re flying — especially to countries where vaping may be an unfamiliar practice. Or maybe it would be wise to just use something simple for a few days.

Vapers have become an accepted part of travel culture, and with a little knowledge about the rules and norms of air travel, we can co-exist with our nicotine-free (or cannabinoid-free) brethren in the friendly skies. If you’re a vaper taking a trip, some judicious planning will help your experience go smoothly.

But there’s no need to worry. Remember, airport and airline staff have been dealing with vapers and vape gear for over a decade now, and so has the TSA. As long as we respect airport and airline rules and procedures, we’ll get respect in return. So, see you in the clouds!